Tonight – a short opera and a few excerpts

The two leading artistes were not performing. It looks like the second-generation artistes are a talented lot whether in acting or singing and the stars are the female artistes.

They are Pang Jin Lian, a female Ghost, a Woman Warrior and the Spiderwoman in the excerpt The Cave of the Silken Web.

Pang Jin Lian manipulated her extra-long water sleeves with much grace and beauty which was a joy to watch. The Ghost executed several difficult operatic moves and stunts. The Woman Warrior and the Spiderwoman displayed some excellent martial and acrobatic skills.

The first time I saw Lin Xiuzhen perform and she was a ghost! But a pretty and graceful one, hahaha.

The short opera was about an unfilial son. Though comical I feel this opera drags a bit and is unconvincing. One moment the son behaved as if his mother was nonexistence and the next moment, out of sudden realization, he became very filial. 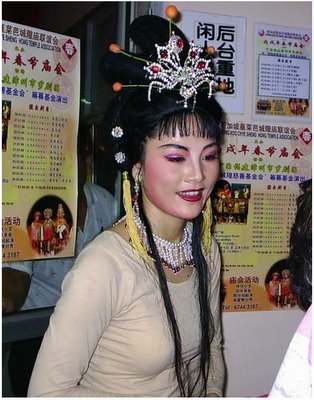 This is the actress who played the adulterous Pang Jin Lian. Actually I had no intention of taking her photo. When I walked out after the show, a crowd was mingling outside trying to peep into transparent door of the makeup room. Maybe they were waiting for their idols to come out. Then I saw this actress signing autographs and chatting with her fans. So I just took out the camera and click!

Well, I guess that's the magic of Chinese opera! If it's too true to life, it won't be as interesting already. A little bit of exaggeration is still needed to liven up the show.

(Anyway it's impressive of you to watch 3 shows so far despite being a Cantonese! Do you understand the dialect at all, by the way?)

Actually it's not that the son was unfilial, it's just that after he got married, his attention is all on his wife, so much so that he neglected his mother, and subsequently, he totally forgotten about her!

You are right that exaggeration is quite normal in Chinese opera. In cantonese opera, for example, a scene with a simple theme can be long and elaborate.

No, I don't understand everything but maybe enough to enjoy the opera. The subtitles help also.

Ya, I think the part where the magistrate tried in vain to make him recall hia mother was quite interesting.

I am surprised that many of the opera artistes are young and pretty. Maybe that's one of the attractions for Frannxis. Haha.

I believe many Chinese opera troupes have got young artistes, just a matter of whether they were given the chance to take on significant roles and be taken notice by the audience or not.

Most of the younger ones are very pretty. The one doing Pan Jing Lian is Yang Zhen Zhen. Abt 2 years ago, she got into Ten Best Young Artiste Award, along with 2 other Zhangzhou artistes. Before they came to Singapore, almost everyone was promoted to 1 grade higher. The handsome "man" is Zheng Ya ling and she also won the Ten Best Artiste Award. The beautiful lady is a veteran actress and she has years of experience. I seldom c her forgetting lines. Her singing has improved tremendously. The comical princess is Xu Yu Xiang, she is the only one who graduated with higher education in chinese opera. She was in Longhai Troupe and then she pursued her studies at Opera Arts School and was allocated in Zhangzhou Troupe (The only professional govt subsidised troupe) after her graduation. She is very good at makeup and I think her acting and singing is good too. The lady warrior is Yang Xiao Yi, the youngest of them all. One of the twins that you saw in that fairy show. The other twin is Huang Yi Ling who does wawasheng's role and is very very cute. She's my favourite.
Yang Xiao Yi can do very very good martial arts though she looks so petite and small.
Spiderwoman is Zhu Li Juan. Poor she, due to the weather here, she lost her voice. Since Day 1, she lost her voice.
Hahaha, Lin Xiu Zhen is AC's favourite. She is always putting on smiles. ^^
I wonder what will be 2nite's excerpts...heheheh....hope something new yozz. Cos I want to watch yozz. (LOL)
I feedback to director already. Hope that I can see something new tonight. But it depends on the schedule as theirs rather tight.
The artistes are getting....shack already. Not enough sleep and tight rehearsals, afternoon still has to "ban xian". After show, their fans zoom up to them, all waiting to bring them out for supper and they are so exhausted. Sometimes they really prefer to rest after shower but upon official orders, they have to go with the VIPs..........
Being an artiste really not easy.

Ya, being an opera artiste is not easy.

Amai, people may be mistaken you are the troupe leader or a member of the ZZ troupe.... you know so much about its artistes.

Most of the teachers in ZZ troupe were invited to handhold us. The first grade music composer, Chen Bin, wrote our "Romance of the Red Dreams Chambers" in year 2000. Teacher Yang, a veteran musician, wrote our 2002 songs in "The Romance of the Dragon Princess."
Director Wu directed our 2002 and 2004 Major shows at Kallang theatre and Esplanade respectively.
They first came 2 decades ago and my troupe leader like their shows and established our amatuer troupe in lates 80s. Though Ge Zai Xi and Xiangju belong to the same root, our performing styles are rather different. We are the only troupe that sticks strictly to the name "Xiangju" though many audience knows the term "GZX" better. I only got to know the actors more when I went to ZZ last year. I tagged along with them when they went to the rural areas to perform.I really enjoyed myself very much. Imagine watching their show past midnite. N my mum was there to keep check on what time I came home. This is so cool!

I mean my mum was not there to keep track of what time I went home. (LOL)

Frannxis, you just took out your camera and snapped her photograph? Never asked for permission ah? Tsk, tsk, tsk. You obviously never learn from others' mistakes do you? :) But I must agree that she's really beautiful. Maybe the thick make-up helped a little... oops.