Looks like Mr Sin Kek Tong will be opposing Mr Yao Chih in Macpherson. Both are good men. The oppositions like my constituency. Almost every election I got choice except when Macpherson was in Marine Parade GRC.

I think you cannot blame others if you have no choice. Why would the oppositions contest in a constituency they feel they have no chance at all. They need to spend money during the elections. They might even lose their deposits.

I also think you cannot fault the big GRCs. The main thing is that the oppositions do not have enough good candidates.

Last night I was looking through some old Chinese newspapers and movie posters in a website. It says as early as 1953 there was this small newspaper in Singapore which featured a nude picture on its front page. That was 53 years ago! Got nude pictures already! Now open your eyes big... 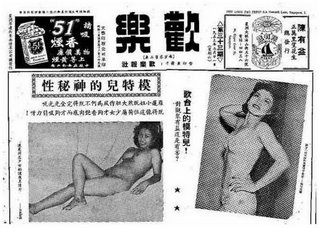 Here is an old movie poster on a show about Zhu Geliang (Kong Ming), the great strategist and a wise man. He served as prime minister to Liu Bei during the period of The Three Kingdoms.

This morning I read about three of the new candidates for the coming election. They are bicultural and they love Chinese classics. Two of them, Lee Yi Shyan and Baey Yam Keng, say that Zhu Geliang is their hero. Vow, if they got elected we would have two potential Kong Meng in the government! 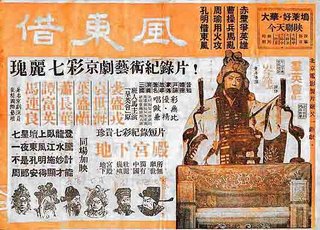 This is one of my brother’s favourite singers. Very sad, she died young, many years ago, from an asthma attack…. in Thailand.

At first I paid little attention to her. But after listening to her songs day in and day out, I looked at her more closely. She had a sweet round face and a pleasant melodious voice – good for sentimental songs. 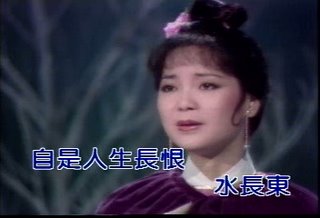 The lyrics of this song were taken from a Chinese poem.


The Bridge
I think many people never really expected the proposed (now abandoned) new bridge to replace the causeway to materialize. Why would Singapore spend millions of dollar on something she feels is not necessary and would not bring any benefit? Do we seriously think Malaysia would sell sand to Singapore to help her expand her size or allow the SAF to use Malaysian airspace?

But why was it not scrapped earlier. Or why was it started without first consulting Singapore? Isn’t it common sense that replacing the causeway affects both countries?

Choice
During a dialogue session about elections on tv, the participants said they want to have a choice. It gave the impression that they want a choice just for the sake of having a choice. Looks like - “I just want to vote, give me an opposition though I may not vote for him.”
I thought they should tell this to the opposition leaders.

Title copied from Amai.
Thought the scrolling effect quite interesting so went to the link and tried....
This nice picture is from Miko's opera fanatic blog. 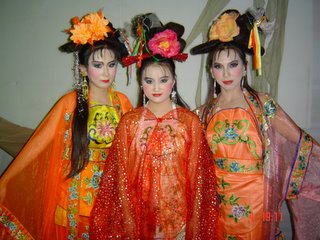 I was reading this blog Natural Remedies, http://foodasmedicine.blogspot.com/. The title reflects its contents.

One of its heading: Eat banana for a stronger stomach

I was thinking how nice if there were food that makes you more intelligent or food that can change your voice or improves it so that you can sing better . Or even food that helps you change the shape of your face. You don’t like round shape, you want an oval-shaped face? No problem. No need for surgery. No need to use ping pong bats either. Just eat this…….Hahahaha


Hi, anyone interested in buying Chinese opera costumes and accessories? Click here for details.
Posted by fr at 11:31 PM 5 comments:


I met her again at the SCO concert last Saturday.

Me: Arts Festival coming, going to see any show?

Girl: This year no good. No Chinese opera.

Me: Got leh (I showed her the programme booklet I have just taken from the SISTIC counter), see Chuan opera – looks like Dr Chua’s recommendation.

Girl: (after reading the brief introduction) this one no good – not top class. The Arts Festival committee don't know about chinese opera. Aiya, Dr Chua and the COI also don’t choose carefully. You see, during the Chinese cultural month, they invited the silly Wuxi Comedy instead of some good Chinese opera.

Me: I think the Comedy is OK – something different. Another one, Zhanjiang Cantonese Opera Troupe. (I pointed to her another page.)

Girl: This actually not by the Arts Festival committee, this organized by the Kreta Ayer People’s Theatre Foundation. I don’t like this Leong Siew Meng (lead male artiste of the Zhanjiang Troupe).

Me: I think he not bad – singing good, skills and acting good. He also one of the youngest. (I think he is in his twenties and his troupe has many young artistes and musicians.)

Girl: He has no 大將之風.

Me: Who you think got this 大將之風 – the younger ones?

Girl: But I think he got it.

Me: You think Lee Hsien Loong got 大將之風?

Girl: Yes, he has leadership qualities.

Cao Ding is the guest conductor from Shanghai. (中国著名指挥家曹丁)

Yu Jia and Wong Sun Tat gave impressive performances. After their performances, some of their students gave them flowers and teddy bears.

After the concert there was an autograph session.

My favourite Chinese musical instruments are erhu, pipa and guzheng.

I still remember a performance by China’s pipa maestro Liu De Hai on the pipa. He looked very calm and relaxed. He mesmerized the audience with his skills, techniques and music. He made it look so easy. But I believe the pipa is a difficult instrument to learn and very difficult to master. 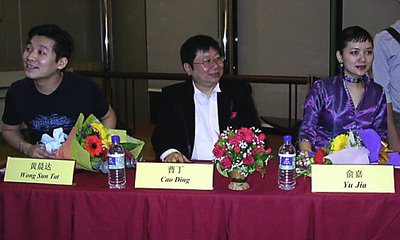 About a fortnight ago I was at the Singapore Conference Hall to watch an SCO concert. I saw the girl again. I have met her at cantonese opera shows, yue opera, pekin opera… And not long ago I also met her at a Xiang opera show at Paya Lebar.

She was at the table helping to hand out booked tickets and selling souvenirs. I walked over to her.

Me: Hi, I thought you were helping out at the COI.

Girl: No need now, they have enough volunteers.

Me: I see, not helping in any way.

Girl: If they need help they will call me.

Me: You very good, every type of opera you support – cantonese, pekin, hokkien … and now SCO.

Me: See you again.

Maybe I will see her again tomorrow night.
Posted by fr at 9:18 AM 4 comments:

The cantonese opera A Gentleman’s Bridge is another unusual story. I think so.

My opera fanatic friend said , “You don’t understand.”
She said that I cannot use present-day moral yardstick to judge Chinese society and its practices thousand of years ago. Then, she said, traditions were law and women had no status in society. Right.

I think I also cannot look at the happenings in the Imperial Court in the normal light. Amai said face and power were more important to the Emperor and the ministers than justice. Never mind if innocent people died as a result.

The TV was on and one main news item was the election in Thailand. Then I thought of Thaksin. Is this also a question of power and face? I am not anti-Thaksin. My personal view is that if the Thais feel that he is not fit to lead the country, then vote him out. But not by street demonstrations.

Back to A Gentleman’s Bridge. The crux of the story:
Due to a terrible blunder a girl was match-made to her lover’s father. How to resolve the matter? An adulterous woman would be put in a rattan cage used to carry pigs and drowned in a river.

The show did not say how the blunder occurred. The audience had to create the missing part.

Usually Cantonese opera shows have beautiful if not lavish backdrops and settings. But in this show, most of the time it was a dark simple backdrop and just the bridge. Miko would be delighted as she likes simple backdrops which leave alot to the audience’s imagination.

Ting Fan and Jeong Mun Tuin are established artistes with their own styles and strengths. I think Ting performed better than last year when his troupe was here. Wen Ru Qing and Zeng Xiao Min, students of Ting Fan, played the young lovers and they performed creditably. Xiao Min is an outstanding ‘dan’ who is adept in the virtuous woman role as well as the warrior role. She sings well too. 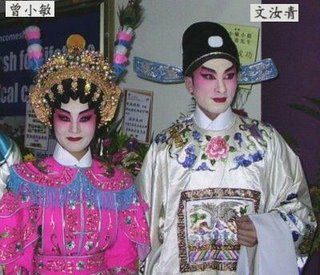