One day I stumbled upon a photo which gave me quite a shock. It also provides much food for reflection. It was a photo of a former Shaw's kung-fu star at his senior age. He is Wang Yu (汪禹). I am not his fan but my image of him has always been a good-looking young man.
You heard of the Cantonese saying 同人唔同命?
This Wang Yu (汪禹) has a different fate from the famous kung-fu star of the One-armed Swordsman fame, Wang Yu (王羽). His film career was not as successful. He seldom did the lead role in his films. According to information, his life after his film career was quite a distress. And he was addicted to drugs. He died at the young age of 53.

In Buddhist philosophy all things are transient. Nothing is permanent. That includes youth and beauty.

Here are 3 sets of photos showing three stars in their prime years and in their senior years.

Brigitte Bardot, a famous sex starlet. I have not seen any of her films. 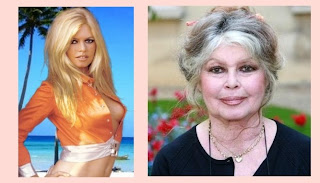 Hong Xian Nu (紅線女), the Cantonese opera diva. I have not seen her perform opera in person. 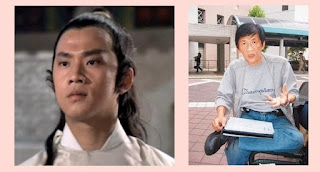 Last Saturday I attended a Cantonese opera show at a community club. There were opera excerpts and songs. The last item was a duet, the song of which fans are very familiar with. I think the lady singer is from Kong Chow Wui Koon or Tung On (I think it is now known as OperaWorks.). I have seen her perform opera before. The male singer is quite well-known and is a good and an experienced singer. 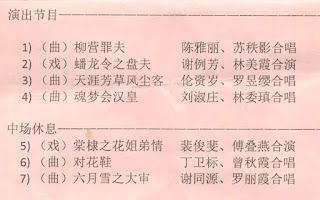 During this last item, a group in the audience stood up and started leaving. Soon more and more people also started to make for the exit. At a show of this nature, it is not uncommon that some people leave early. But, in this instance, it looked like an exodus. I think it is quite disheartening to the two performers.. Why? Couldn't they wait for about 10 minutes more for the song to end? I am sure these people were not going to attend to some emergency or to attend an important meeting. They were also not old folks brought there by buses and had to leave at a certain time. It was not late neither. I think it was about 10 past 10. Were they trying to make it to another show?.

Anyway, I think it is not nice to leave in the middle of a performance. It is better to leave before the item starts.

Perhaps the compere in a show like this could remind the audience that the last item is only so long, say15 minute, and the artistes would appreciate if they stay on to support.

Lin Chong's wife had a tragic death. The Magistrate at the Court in Hell-land took pity on her and allowed her spirit to go to Earth to meet her husband. They met in a temple.

I have been attending this annual show by the Guangdong Hui Guang for a few years. I have seen many of the artistes (students) perform before. I would say that they have made much improvement. On the whole I think the show was pretty good.

The president of the association's management board gave the welcome address. Towards the end you might feel as if you were at an election rally. He praised the Government saying that it has done a good job running the Country and making the street safe. He said that in the earlier days secret society gangsters roamed the streets in Chinatown.

The Guest was MP Alex Yam Ziming (国会议员任梓铭). In a short speech in Cantonese he said he came into being because of Cantonese opera. One day, 65 years ago, his grandfather went to see an opera show. He not only saw the opera, he also saw the girl that would later become Alex's grandmother. It was love at first sight. They got married and produced six children, one of which was Alex's father.

By the way, the MP came with his wife who is very pretty.


A gift for the opera teacher 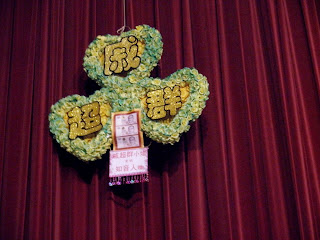 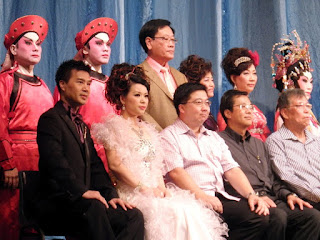 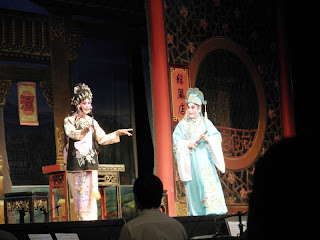 A few members of the Management board (会馆董事) also sang. They were entertaining. They sang well too and not only sang, some got action somemore.. 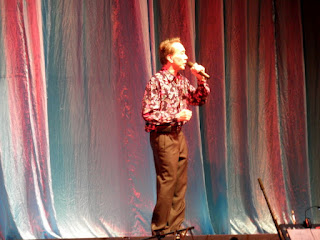 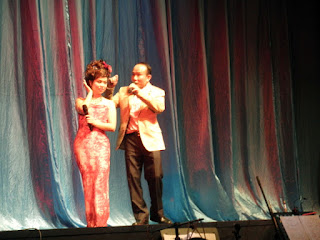 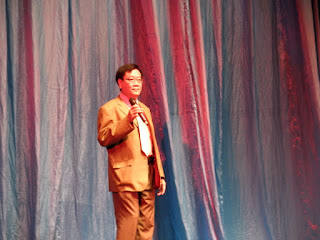 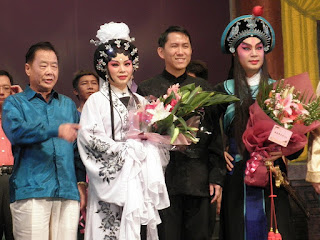 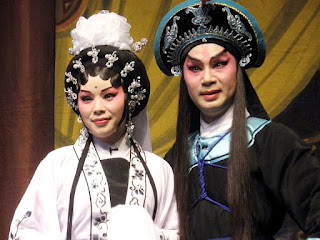 Heritage fans would like to conserve old buildings, swimming pools. cemeteries and other old things with heritage values.

Heritage also includes traditions, customs and culture. So this blog can be considered a heritage blog too.

To preserve Chinese opera in Singapore is not easy.

First, you need people, especially younger ones, to be interested enough to want to learn and perform. Then you need fans and supporters. And you also need financial resources.

If you ask older Cantonese opera fans, I think many will tell you they were exposed to it when they were young. For example, they followed their grandmothers or mothers to the wayang. Nowadays, the young are not in such an environment.

My view is that Chinese opera will not fade away but the circle will get smaller and smaller. Professional foreign troupes will come less and less often because of the high cost of bringing them in and also because of dwindling audience.
Posted by fr at 11:42 AM No comments:

Congratulations to the two readers. Your answers are correct. 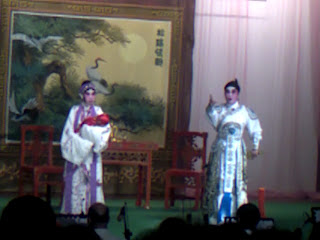 You cannot see the faces of the performers clearly from the video. I guess you have to be quite familiar with local artistes and recognize their voices to identify them.

I am not sure if I got the Chinese characters of the Sheng's name correct. If not correct, please let me know. 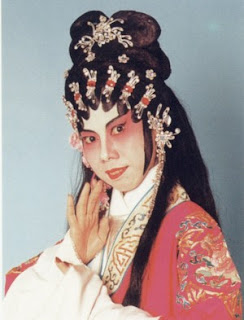 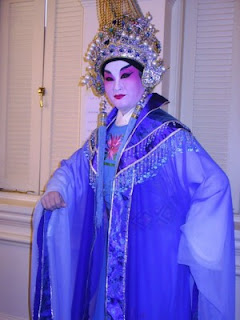 Here is a 15-second video clip I took more than one year ago. Actually I was only trying out my new mobile phone. It was taken from quite a distance from the stage, so quality is not good. Do you know the names of the two performers and the name of the opera excerpt?
旦 = ? 生 = ? 劇 = ?

There are quite a number of elderly folks above 65 in my ward. No need to wait for 10 or 20 years. By then their percentage will have increased. I see them at the market and the void deck near my block. Some were just sitting around chit-chatting.

A very stark reminder is old people using the overhead bridge nearby. I have seen a few walking up the stairs one step at a time. One or two of them need to use both hands to hold onto the railings. There is a man bent at the waist. Then there are also folks on wheelchairs helped along by their maids.

However, they look quite contented. Maybe contented is not the right word to use. I mean it looks like they have come to accept aging and the failings that come with it. Once I saw a woman sitting on the steps and I asked her if she needed help. She said she was ok, just taking a rest and thanked me.

These people I see are probably quite active and healthy. Those in a poorer state are likely to stay at home.

The Government have already started taking measures to prepare for the silver tsunami in 2030 and with regular reports and reminders by the media, I think people will be mentally prepared. I also think many people approaching 65 are taking steps to keep themselves active and healthy. So I am quite optimistic that things will be okay when the time comes.

If you want to know what it is like to be in a gathering of mostly silver-haired folks, you can attend a Cantonese opera show at a Community Club.

It is always "not enough", "can do more" (about budgeting money to help the poor). Every year we hear this. Even if the amount is increased or doubled, there will still be people saying the same thing.

Some say "Let the bus operators pay for the buses themselves." But no one says "Let them decide on bus fare increases just like other private companies." (At present they must get approval from the authorities before they can increase fare.)

I think some MPs would like to say 'Enough, don't give too much' or 'Let the bus fare increase". But they cannot say these publicly.

Bus companies have to hire more bus drivers, increase their pay and improve their working conditions and maintenance cost will also increase. Government subsidies will run out. How can the fare not go up.. 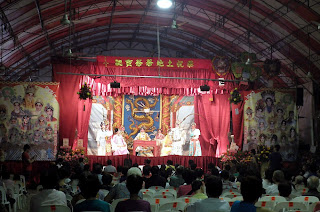 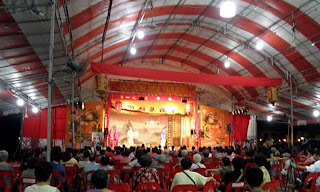 Where is this opera stage? 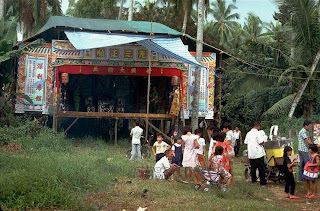 Answer at this post:
http://blogtoexpress.blogspot.com/2012/02/ways-done-in-past-chinese-wayang.html
Posted by fr at 10:35 AM No comments: