For Love of Country

On Sunday there was an article entitled For Love of Country – It is all inside the heart. The columnist seems to imply that loving the country is the most important, it doesn’t matter whether you display the flag or not.

True, displaying the flag doesn’t prove you are patriotic or if you don’t display the flag it doesn’t mean that you are unpatriotic.

I look at it this way:

Displaying the flag is just a small way to show our affection. Is it too troublesome? And if a lot of people think this way, then there will be only a few flags hanging out. It will look pathetic.

Do we not buy presents for people we care for on mother’s day and their birthdays? Why not save the money and just tell them ‘it is all inside my heart’. And why even bother to wrap the presents nicely.
Posted by fr at 6:25 PM 3 comments:

There is a clinic at a block nearby but the consultation plus medication fees are quite high. So I only see this doctor when I have dizziness, sprained angle, stomach fever or such ailments that make walking difficult.

My regular doctor is further away. He is very experienced. One important thing is that his medication is usually very effective. When he is not in, there will be a temporary doctor to replace him. Before I go I will call the clinic to ask if the doctor is in because I do not like to see replacement doctors.

In that case I will see another doctor at the other end of the road. This doctor is very friendly and you can talk to her about other things also. I think she is very sympathetic to people in my profession. Whenever my temperature is 38 or above, she will say ‘You have a good rest. Don’t worry, I’ll give you 2 days medical leave’.
Posted by fr at 1:00 AM 8 comments:

Don't put up The Flag

It was a warm humid evening. As I was dozing off on the sofa, there were knockings at the door. A sweet voice came through, “Hello! Hello! Anyone in? Hello!”

I sprang up and went to open the door. A lady stood outside. She had a cheerful disposition.

“Sorry to disturb you; it is like this.…We have put up the national flags at your block. Please do not put up your own flag.”

“No, we put the flags in a way to form a certain shape. If you put extra one it will be out of place, not nice you see.”

“I see. Thank you for taking the trouble to inform us and putting up the flags, very thoughtful of you all.”

She did not introduce herself but I think she is a member of one of the residents’ committees. Since last year the RC has put up flags at our block. Before that I used to put up my own. Then only about one-third of flats in my block did that.

That was yesterday. This afternoon I went to the top level of the opposite block to see what shape it is.

Here is a picture……..click on picture for bigger version. 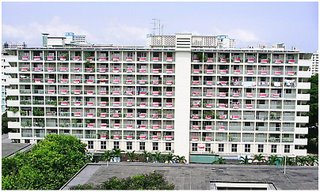 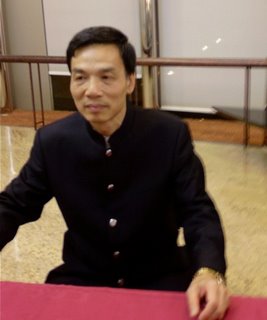 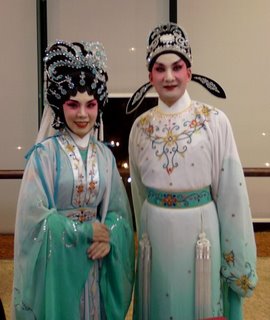 Imagine cantonese operatic songs sung to the acompaniment of a chinese orchestra with over 70 members. Wouldn't their voices be muffled by the sound of the orchestra?

Well, it didn't. Ni and Li are skillful artistes and have strong vocals and their singing and the words of the songs came out clearly. And they sang well. They were in ordinary clothes for the first 4 songs but were in opera costumes complete with make-up for the last song.

平湖秋月 and 双声恨 were performed with the full orchestra and the pieces were rearranged and didn't sound quite the same as the traditional ones.

步步高 and 旱天雷 were performed with a reduced orchestra consisting mostly of gaohu players.... and a yang qin player. These two pieces have more of the original flavour.

旱天雷 was a rousing piece and the last part was very fast-paced. You could see Yu's wrist vibrating, flickering the bow to and fro across the two strings of the gaohu at a frantic pace. Although there were many hu qin players, their movements were synchronous. It was a pleasure to watch and to listen.


Some articles in the July issue of this Chinese opera magazine: 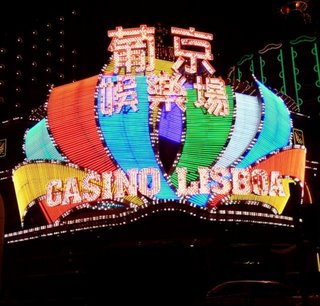 I think this is the only city in Asia with so many casinos in one place. On the tourist map more than a dozen are marked. I suppose these are the bigger ones only. Almost every big hotel has a casino. When you walk about the city at night, you can’t miss the neon casino signboards. Some casinos require you to show your passport or IC before you can enter. The casinos here are purely for gaming, no other entertainment – unlike our upcoming Integrated Resorts.

The livelihood of many people here depends on them and so does Macau’s economy.

I went to 3 casinos – Lisboa, Sands and one in a hotel. Lisboa and Sands are the two bigger ones. There are many betting games. I was watching people betting at a ‘big-small’ gaming table at Lisboa. There were quite a lot of people at this table.

There are various betting combinations. I don’t know how they work. Your fortune is determined by the three dies. I only know that if you bet on ‘big’ and the total of the numbers of the 3 dies is bigger than half (the maximum is 18) then you win.

It happened that ‘small’ came out 6 times in a row. So most of the people placed their bets on ‘big’. You know what next – 5 on each die, total 15. Big, right? But the rule is that if the 3 numbers are the same, then whether you buy big or small you also lose. The same if the total is exactly half. I am not sure what is exactly half.

After some time we felt quite bored. I don't think I will be a gambler even I live next door to a casino.

I think Singaporeans need not worry too much about our IRs making more people become gamblers. I feel that only few will get addicted. The only thing is that those who are already gamblers will have a nearer place to go to.

I had placed a small bet on Italy winning the game in the semi-finals. Italy won. So yesterday afternoon, happily I went to collect money. The counter girl told me that the result was based on the 90-min game. The result : Draw. Italy scored the 2 goals during extra time, so it was not counted.

Now then I know. So malu!

My predictions for the semi-finals:-
Germany, Italy, Portugal, Brazil


Disappointed that Brazil lost..
I think the finalists will be...Italy and Portugal


Unfortunately Portugal did not get through although to me they looked the better team last night.
The 2006 World Cup holder will be Italy.

There is a Ge Zai Xi performance at Gu Cai Ba. GZX is a type of Hokkien opera and GCB is the Sheng Hong Temple at Paya Lebar. This is the temple’s website: http://www.shtemple.org.sg/ 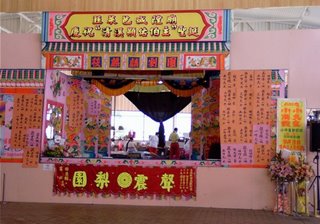 My opera-loving blogger friends have put up several posts about it. The troupe is a local one but there was a popular guest artiste from Taiwan whose singing is highly-rated by my OBF. (She had her last performance yesterday.)

The opera fans are very generous. They present cash gifts (between $200 and $2000) to their idols. The announcements pasted on both sides of the stage tell you the amounts of cash gifts the artistes got from their fans. Amai said the tw star got more cash gifts last night.

I think she got more than our MP’s monthly allowance.

This is the second place where I see cash gifts at street operas. 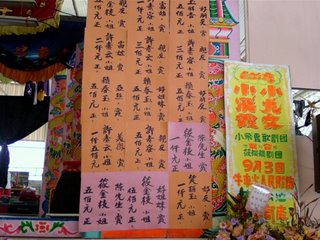 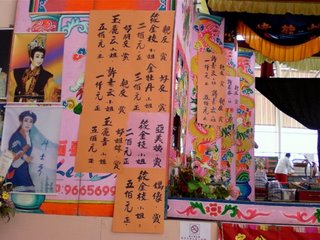