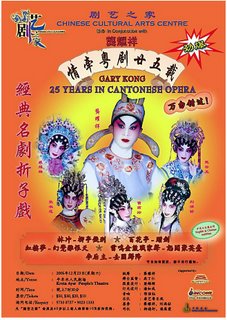 Oh....is him....
Some years ago, Theatre Circle used to perform at Clark Quay...I think for tourism purpose...
You know what he told me..He told me that he was just a newbie...I din believe it cos every inch of him on stage couldn't be just a simple newbie. Someone told me that it wasn't true...just that I dun understand why he had to tell me that...
(I was just part of the audience..)

During that period he was one of the regular performers at Clark Quay. He was then with the CTC.

He starting learning opera when he was in his teens; so i guess he is around 40 which I think is considered young for an opera artiste.

Like XJ, he has very good memories. I have not seen him make a slip in his singing yet.

to have more than a decade is quite an achievement as learning opera is a lifelong process.

He's no longer with the CTC, what troupe does he belong now or is he doing free lance?

he set up the Chinese Cultural Arts Centre with some friends in 2002. This centre also conducts opera courses and he is one of the teachers.